No matter which direction you approach the Dealey Plaza Museum, there are parking lots on both sides of the building. In the picture below, Dealey Plaza museum is the orangey brown building ahead on the right. When parking, remember the number of the space you park in because when you pay the parking machine, you need to enter in that number. We only paid $4 for parking since we were only there for 2 hours. 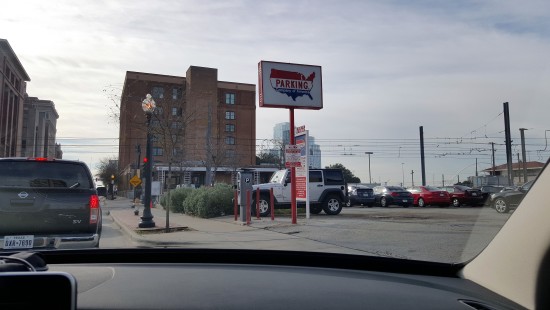 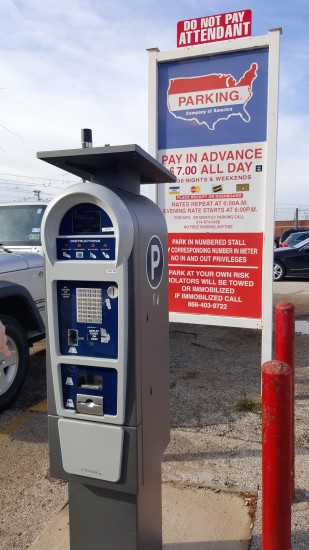 Tickets to the museum are $16 for adults. The process to get into the museum is a little unusual. I’ll start with my recommendation for how to get in and then explain the entire process. First, I would suggest going Monday through Thursday before Noon. Buy your tickets online and either print them or have the PDFs ready on a mobile device. The ticket will show the set time you have selected and you can only go through the museum at your designated time. Show up about 15 minutes before that time and get in line outside at the group entrance door. That’s the easiest way to get in. 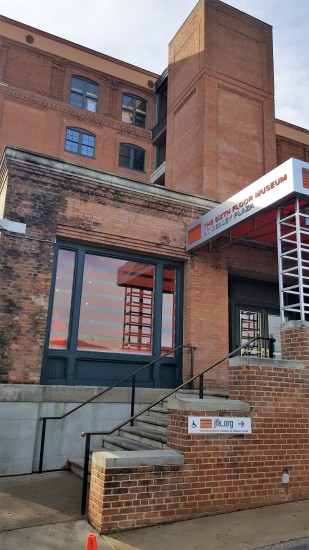 Here’s the full process if you just show up to buy tickets. First, you’ll lineup at the ticket buying entrance. You’ll be let in a few at a time to get into the inside line to actually buy tickets. There is only one cashier so the line moves slowly. They’ll sell you tickets for the next available time (we were there at about 10:15am and were given tickets for the 11am entrance).

If you have a purse it will be searched and backpacks and large bags must be left at security. If there is a lot of time before your window, you can leave and come back. We took pictures outside and then lined up at the group entrance door at about 10:45am. At about 11am, our line was let into the building to stand in another long line for about 15 minutes. When we finally got to the front of the line, they took tickets and directed us to another line where we were given headsets and a brief explanation of how they work. We were there on a busy Friday (there were a lot of tourists in town for a Saturday college football game), so the wait times may be less during other weekdays. 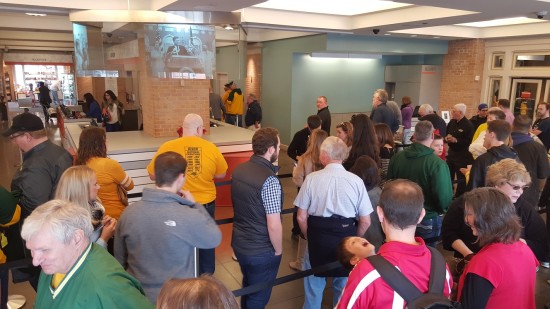 The museum is on the 6th floor and no pictures are allowed. The museum itself is a complete waste of time and money if you are someone who knows a great deal about the assassination. With this museum being a mere reiteration of what you can see on any JFK assassination documentary, we were extremely disappointed.

The museum is tiny and difficult to move around since so many people are squeezed in. You first view exhibits about what life was like during that time period including what books and movies were popular. Then you see exhibits about the politics of the 60’s. Everything else is a timeline of the day Kennedy was assassinated and the aftermath including conspiracy theories.

While walking around looking at this stuff, your headset also has some of the same information but the narrator speaks so incredibly slow that it would most likely take 2 hours to get out of there if you listened to all if it.

The only interesting artifacts of the museum were Lee Harvey Oswald’s wedding ring, a replica of the Zapruder camera, and the cream colored suit worn by homicide detective Jim Leavelle who was handcuffed to Lee Harvey Oswald in the famous photo where Jack Ruby shoots Oswald.

What is most fascinating is the window which Oswald used to shoot President Kennedy. It is completely blocked by plexiglass so you can’t get near it nor can you see the view from that particular window because much like the day of the assassination, there are boxes stacked high around the window. But it is possible to stand up against the adjacent windows to see the view Oswald had when he shot the JFK.

The 7th floor was wasted space. Pictures are allowed on this level but there was nothing worth photographing. There were a few large and uninteresting photos on the walls but all the windows above where Oswald shot from were blocked off so we couldn’t even take pictures from there.

The surrounding grounds of Dealey Plaza are much more fascinating than the museum. Walking around Dealey Plaza is a surreal experience and no matter how many pictures or documentaries you see, in real life there is an unexpected and overwhelming sense of deep sadness and awe when standing near the X on the street that marks where President Kennedy was shot. In the picture below, you can see the X on the street in the middle lane and the orangey brown building on the far left is the former Texas School Book Depository. The window Lee Harvey Oswald used is one down from the top window, far right, near the red building. 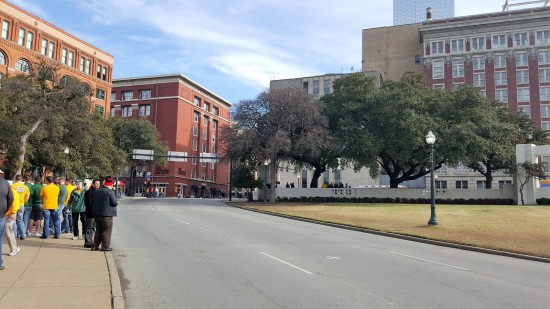 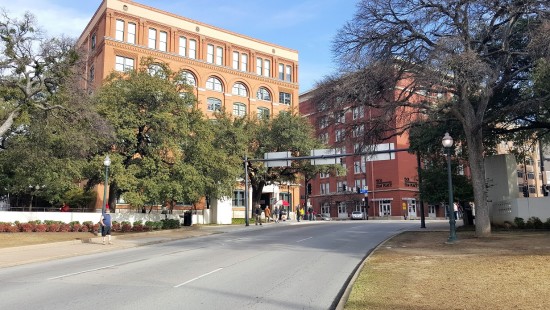 In various spots around Dealey Plaza, you’ll find plaques with interesting information. It’s fascinating to look at these pictures and glance upward to see that the view hasn’t changed since 1963. 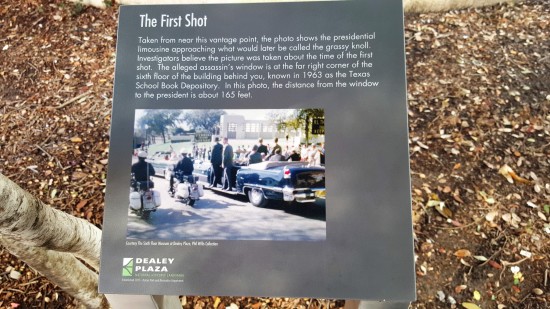 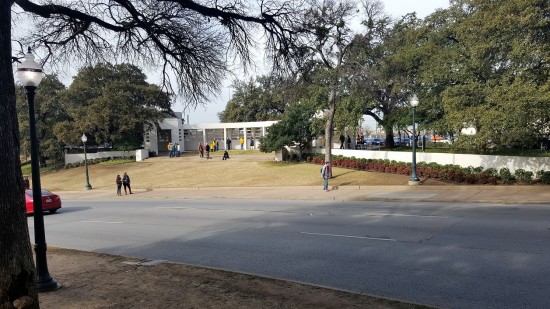 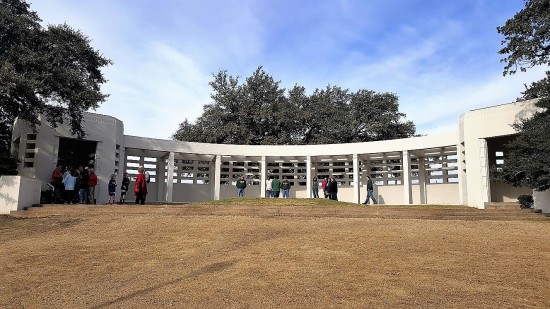 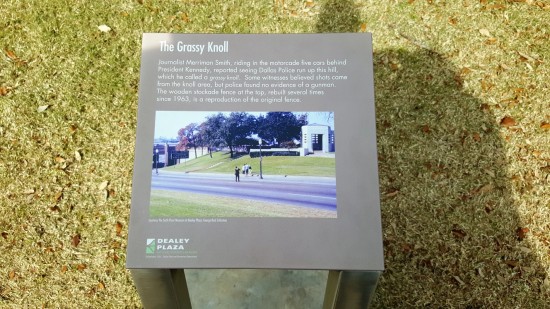 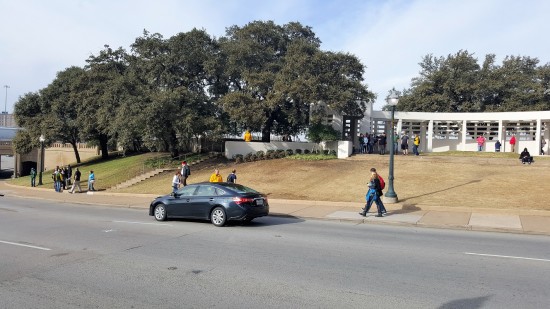 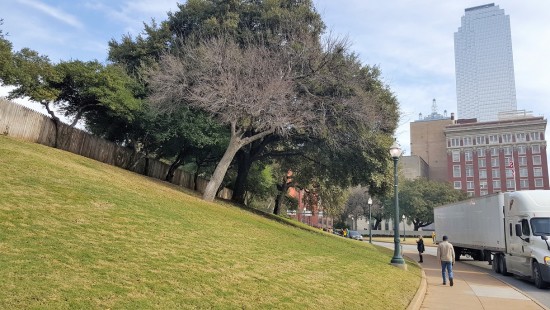 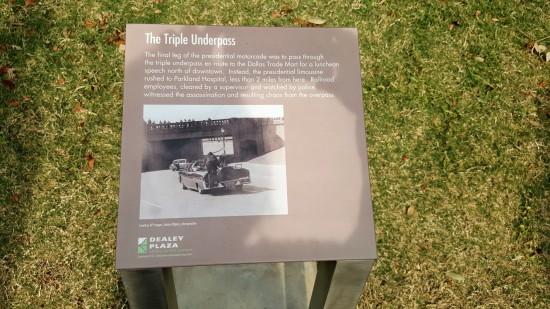 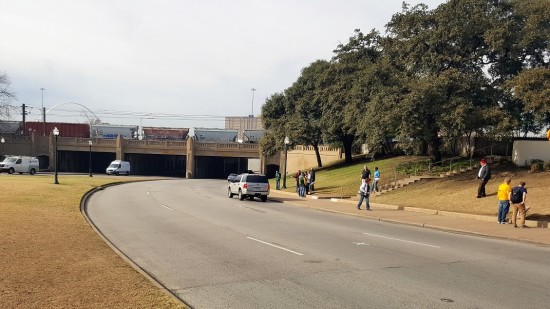 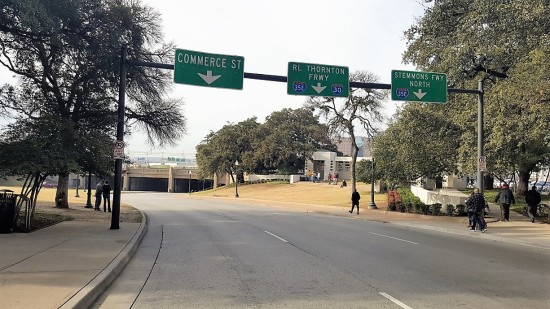 Dealey Plaza has become an iconic part of American history and is definitely worth a visit if in the area, but the museum is a miss unless you have a strong desire to see the 6th floor window. For the complete JFK experience in the Dallas Fort Worth area, the night before visiting Dealey Plaza, stay in the Fort Worth Hilton which is where President Kennedy spent the last night of his life. (For a review of the Fort Worth Hilton, click here.)