The show is located in Harrah’s and is one of the only shows in Las Vegas running during the afternoon. It is suitable for both adults and kids. I went in with low expectations since comedians never make me laugh and magic is of no interest to me but Mac King was funny and engaging and the magic was actually pretty impressive. I highly recommend the show to everyone. 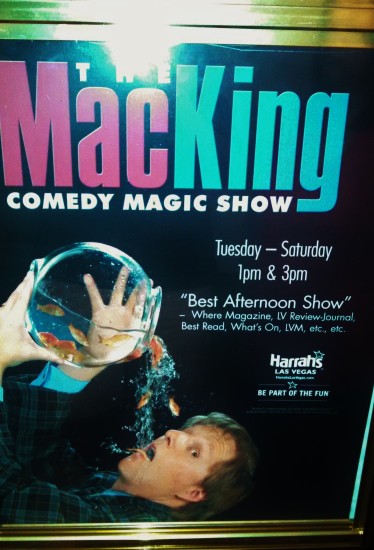 We got a Total Rewards coupon for free tickets with the purchase of two drinks for $9.50 each. We also upgraded to VIP seats which was another $5 each. Upgrading to VIP provided us with a 2 for 1 coupon for Harrah’s buffet so overall it seemed like a good deal.

We chose VIP primarily because the seats at the front of the theater have more leg room. The regular tickets are sideways tables. Because there was a small audience for our show, everyone was moved up to the front VIP seats even if they hadn’t paid for it. There are no assigned seats in your section. Before doors open you are either in the VIP line on the right or the regular line on the left. When the theater doors open, the usher will tell you which seats to sit in.

During the show, Mac King brought up a person for almost every trick he did. He didn’t make them do anything embarrassing, they simply served as his assistant. Mostly everyone selected came from the right aisle (when facing the stage). There were lots of laughs from the adults but it was especially cute hearing kids laugh so loud! 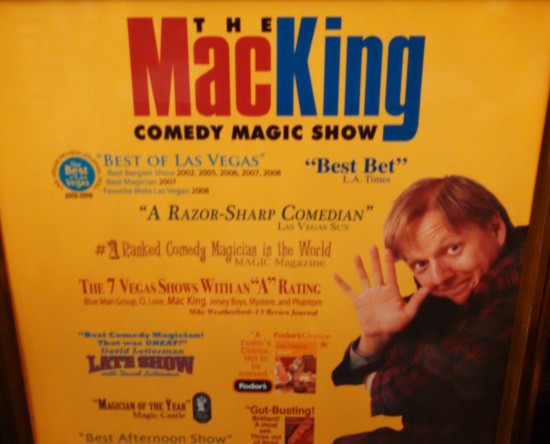 The only negative was the full figured blonde woman who seemed to be a manager of some sort. Before we were let into the theater, she made everyone take a posed picture by the shows photographer. Some people declined but the blonde lady told us that we all had to do it because it was a part of the show and Mac King does something funny with the pictures. That was a complete LIE. The pictures were NOT in the show. After the show, as we were all exiting the theater, everyone’s printed picture was being displayed and that same blonde lady was trying to force everyone to buy them. This cheapened an otherwise positive experience.