The museum itself is small but very interesting. This is a place that any baseball lover will appreciate. There’s a lot of neat things to see including a signature wall of players who signed contracts with Louisville Slugger. 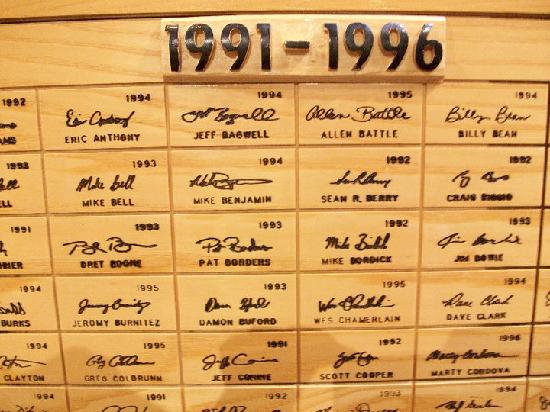 You can hold Mickey Mantle’s bat which my husband said was magical and there’s a display where a baseball is shot out at 98mph to a fake catcher so you can see how fast it actually is for the professional baseball players. Also, there are a few of Babe Ruth’s bats, Phillies World Series bats, and wax figures of a few players. Right outside the building is replica of Babe Ruth’s bat that weighs 68,000 pounds and is 120 feet tall. 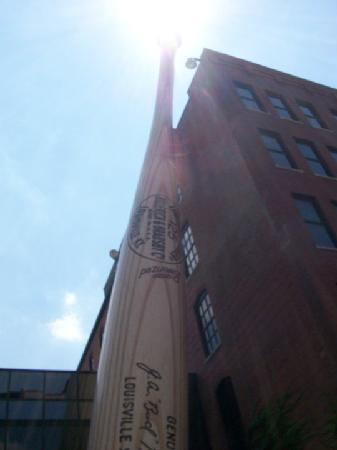 You have to pay to tour the factory. It’s a real factory where the actual professional bats are made. It‘s kept very warm and humid and because we were jammed into a tiny space with about 50 other people on the tour, it felt like we were in a sauna. They take you through the factory, station by station, and explain what the bats go through at each point such as getting cut into their shape, being dipped in the paint that is chosen by the pro, and placing the players name on the bat. The only good thing about paying for the factory tour is that they give you a mini bat at the end and you also get admission to the Negro League Museum.

The Negro League Museum is really special and the best thing about the entire museum. There are beautiful paintings of the players from that time, either in portrait or moments of action during a game, and real photographs as well. Plus, there was a lot of interesting information, uniforms, gloves, etc. It’s a small collection but truly awesome! I just wish they allowed pictures to be taken in there.