My husband and I both travel a great deal and the front desk service at this hotel was the worst we’ve ever experienced.

When we arrived, the lobby was crowded with three long and slow moving lines at the front desk. After a 15 minute wait, we made it to the front of the line but the front desk man, Scott, and a female worker didn’t bother to acknowledge us at all but instead continued to converse with each other for at least five minutes, never once glancing our way. Then they both left the desk without saying anything to us. Someone behind us in line said, “Are they coming back?” I didn’t know if we were supposed to get in a different line. We were all becoming increasingly frustrated and 5 minutes later the same guy, Scott, finally returned without offering his apologies for making us wait. We were so appalled at the wretched service that I snapped a picture to capture the incident.

When we got to our room, the phone rang and it was the female from front desk wanting to know what my picture was for. I said it was for an online review. She said she didn’t feel comfortable with that and told me not to post the picture. I told her I was going to post it but would block out their faces. She said she was going to look into the law. I simply said okay. Not once in all our travels have we been treated in such a manner. The front desk employees at this establishment are in desperate need of proper customer service training.

As for the rest of the hotel, we were in room 755 and had a dreadful view of a roof and AC units. 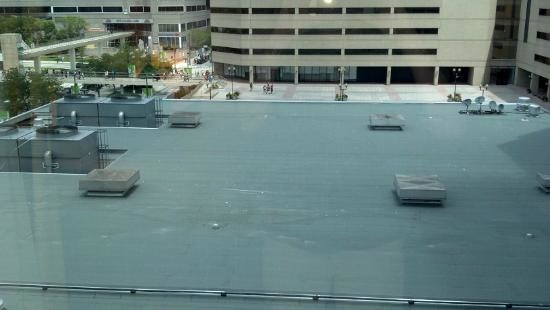 The room was spacious but lacked the wow factor of every other 4 star hotel we’ve visited. There was wear and tear on the furniture, stains on the carpet, and our coffee maker lacked a coffee pot. 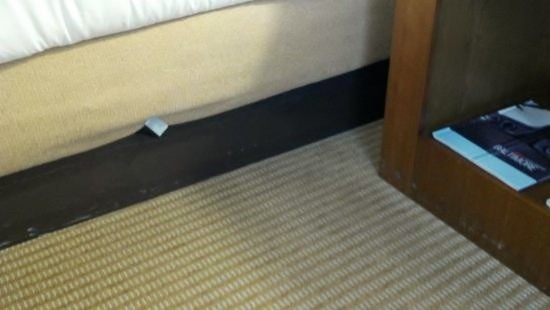 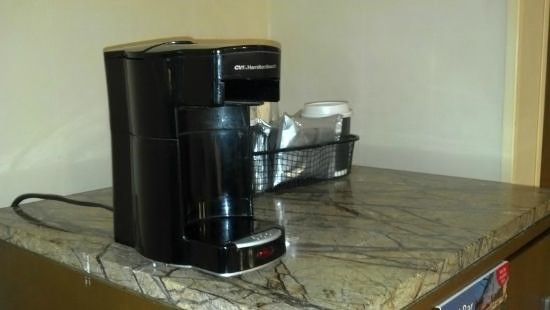 There was no microwave in the room and even though there was a fridge, it wasn’t for personal use. The bathroom didn’t have a fan and was very echoey which made privacy almost impossible. There wasn’t any counter space to place toiletries and the toilet had a push lever and looked like it belonged in a rest stop. 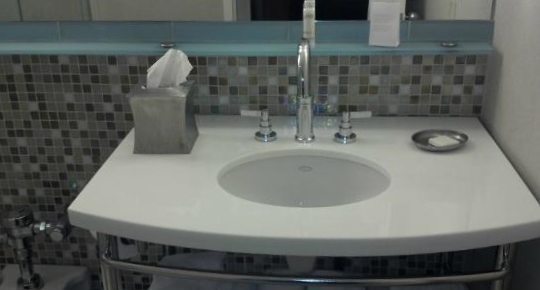 Despite the shower being aesthetically pleasing, it was poorly designed in that the door was on the opposite end from the shower head so when I turned the water on, my entire upper body was shot with frigid water and in order to reach the handle to adjust the temperature, I had to reach back into the cold water. Also, there was no tub in the bathroom. 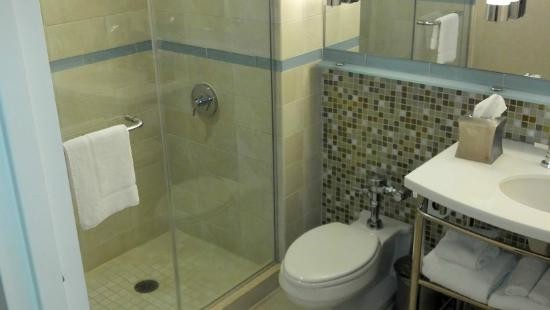 We didn’t have a Do Not Disturb sign in our room and although we used the interior lock that said “privacy,” the maid knocked on our door at 8am when we were still sleeping. 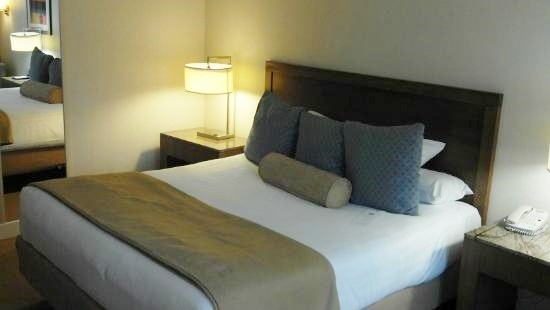 Internet was not free and there weren’t any HD channels on the TV. We never heard anything from other rooms but could hear a great deal of noise from the hallway. 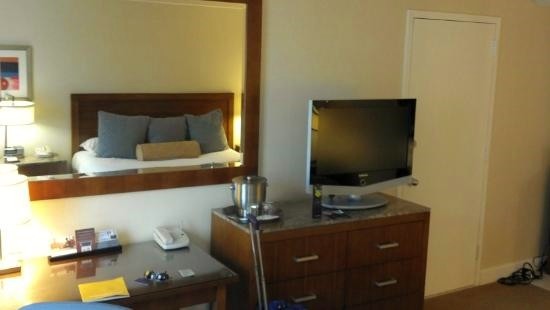 Checking out of the hotel was unsatisfactory. A woman standing near us didn’t know what to do because the front desk was devoid of employees. She said aloud, “Isn’t there anyone working here to help me check out?” My husband and I proceeded to use the self-check out kiosk instead of waiting forever for an employee to appear.

Valet was very professional and friendly and had our car ready promptly. Self-park was $28 and valet was $40.

The only other positive I can mention is the location. The hotel is within walking distance to a myriad of restaurants and entertainment but I recommend staying at a different hotel in the area that has proper customer service and everything else this property lacks.