The entrée’s, however, failed to impress and made us wish we had simply reordered more appetizers. The fish and chips, the salad with chicken and bleu cheese, the baked potato soup, hot wings, and chili were merely satisfactory but did not rival the greatness of the meatballs and pretzels. 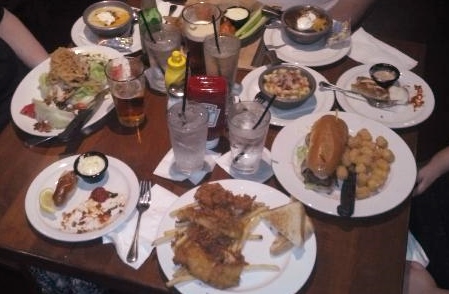 Unfortunately, my entire entrée was awful. I ordered the fondue burger that was dressed with caramelized onions, melted cheese, and garlic mayo with a serving of tater tots on the side. It was so incredibly bland and dry that I can say with ease that it was the worst burger I’ve ever had. After three bites, I didn’t want anymore. My tater tots tasted of frying oil and nothing more. Five pieces was all it took to realize that I could no longer ingest the foulness. Furthermore, my extra side of macaroni and cheese was merely pasta that had been boiled, placed in a small bowl, and then had a bit of cheese and bacon sprinkled on top. Since when is macaroni and cheese completely dry?

Normally, when your meal is so dreadful that you refuse to eat it, you are not charged for it and the restaurant will attempt to rectify the situation by offering you a different entrée. All our server did was remove $5 for the extra side of macaroni and cheese.

Be good to yourself and stick to the appetizer menu. You won’t regret it and I won’t have to say “I told you so.”