My brother and I visited AT&T Stadium to watch our Philadelphia Eagles take on the home team Dallas Cowboys. I’ll start by saying the stadium is quite amazing. It’s one of the largest stadiums in the NFL (it has the capacity to expand to more than 100,000 seats which would make it the largest). It’s visually imposing as you approach it and it could be overwhelming as you enter. 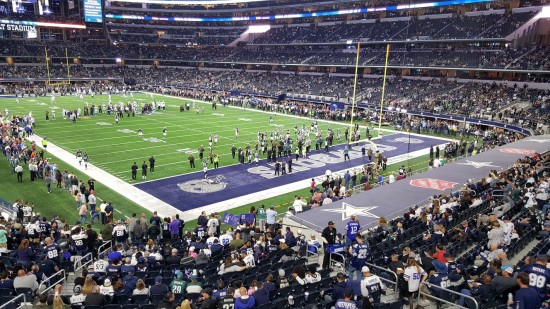 The stadium is located in Arlington, which is between Fort Worth and Dallas right off of I-30. It’s next to Globe Life Park, the baseball stadium for the Texas Rangers. There is plenty of parking around the stadiums, but it can be expensive. The stadium lots all require parking passes which aren’t always offered along with the tickets for sale on StubHub or the NFL exchange. There are numerous commercial lots surrounding the stadiums with many selling spots on game day. They can be very expensive, but offer a short walk. Getting to the stadium off of I-30 can be slow, but it’s not hard. 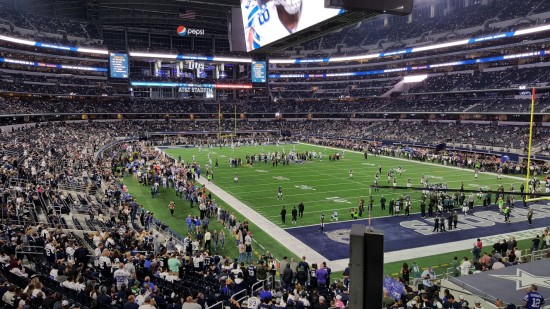 My brother and I were dropped off near the stadium and walked in. There were plenty of people on the streets so walking wasn’t a problem. Even the walk back wasn’t too bad even though we had to cross over I-30 to get to where our ride had to park (the incoming traffic was blocked before it could cross the interstate, but there was a walking bridge).

Being a visiting fan at an NFL stadium is always an experience. This was no different. We had great seats in the first row of the second deck in an end zone corner. We were also right on the aisle. The fans sitting to our left were great. They were die-hard Cowboys fans, but respectful of visiting fans. We had good conversations with them. The fan across the aisle from us, however, was loud, rude, obnoxious and likely drunk. After a touchdown gave the Cowboys a lead, he moved toward us yelling, as loud as he could, “F— you. F— you.” We calmly asked him to back up. After the Eagles won on a long TD pass in overtime, this particular fan wanted to fight another Eagles fan near us. Thankfully, his girlfriend slowed him down. I wish security had been a little more responsive. 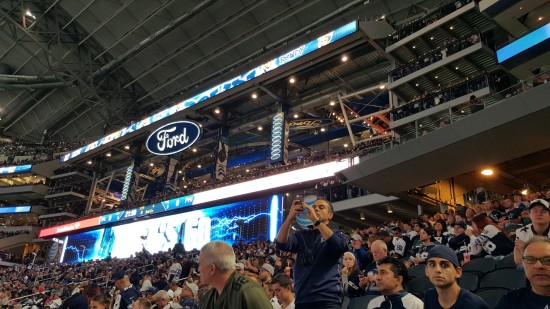 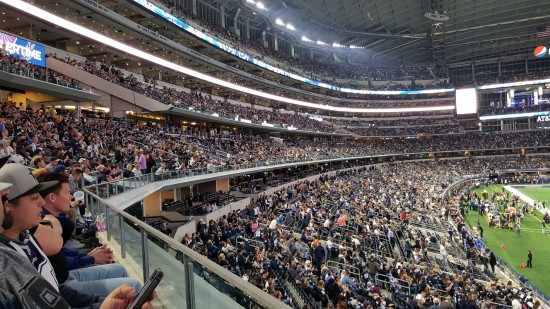 Once again, the seats were amazing. We had a tremendous view of the entire field. For a stadium that generally seats about 80,000 fans, I’m not sure there’s really a bad seat anywhere. Even the higher decks never seemed too high. It’s a modern stadium so none of the seats seem to sit too far back from the field. And if you can’t see the field, you can certainly see the giant video board where runs from one end zone to the other, the world’s largest HD screen. Each end zone also gets a large video board. Seeing the action is never a problem. For our game, the opening in the roof was left open, but it can be closed if there is bad weather (that decisions is usually made before game time). 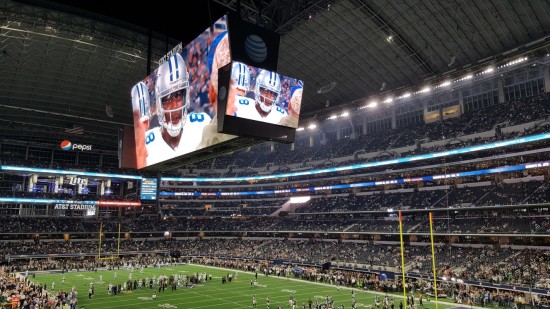 AT&T stadium is a great place to watch a game. If you’re not a Cowboys fan, you’re sure to run into a few obnoxious home fans, but that’s been true of any NFL stadium I’ve visited. We didn’t eat anything this time, but there seemed to be plenty of places to get food and plenty of vendors in the stands. For as many people as were at this game, getting in and out wasn’t too bad. If you do attend a game there, my hope is you root against the Cowboys!